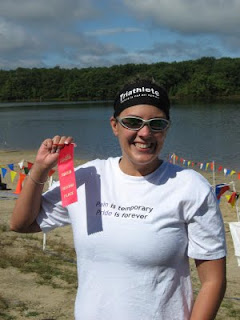 I would like to start this post by saying, I would have never been able to even attempt a triathlon a year ago. I was over-weight, out of shape and just not even in that frame of mind. But- what a difference a year has made. I have dropped about 30 lbs and am officially a triathlete! Not only a triathlete but looking forward to the start of next season and racing again!

Now- back to race #1! haha :) I arrived early on race day to pick up my packet and set up my transition area. I actually was the first one there- got a great spot. As race time approached I was more and more nervous- but I have the best friends and family in the world. My whole family was there to support me and my friends Dutch and Robin made shirts for everyone! TEAM JULIA It was great to have such a big cheering section. They are the best a girl could ask for. My trainer (who is also my massage therapist) took the day off from clients to be there for me! I had the BEST cheering section at the tri!

I walked over to the race briefing. A run down of the swim course, swim out and around the 2 kayaks, and avoid swimming into rocks at the end! The bike course we were told was wet and slippery- great I was already nervous about that part. Not too much insight into the run. There were 3 waves- elites/teams and men and women. I had signed up to compete as an Athena 150lbs+ I wore my Under Armour sports bra and TYR tri shorts into the water.

Each wave started 3 minutes apart- a standing water start. I moved myself to the front but off to the left side. I hoped that would keep me from getting kicked/swimmed over. I started out the swim a little harder than I planned- and realized as I was trying to spot the kayaks. Even with slowing down a little I was out of the water in 7:55 for the 1/4mi swim. The 6th woman out of the water! Just where I wanted to be.

T1 consisted of putting on my socks, running shoes, jersey, racebelt, helmet, sunglasses, my bondiband headband , and grabbing my bike.I did that all in 2:27. Not a bad transition time. The bike started out as a trail then hit pavement (straight up hill) then hit hard single track trails! I had mountain biked quite a few times, but when you are on difficult terrain with other people around you, it was a lot harder. I was on and off the bike a lot. I even fell in the woods once. But I played it smart- if I thought I could get hurt doing something I got off the bike and walked/ran. I finished the 5.5mi mountain bike in 44:27. Right around where I wanted to be.

I brought the bike in for T2. All I needed to do was take on some fuel- my choice fuel is Cliff Shot Blocks- and took on some water. Transition2 was only 1:08. Fast turnaround without changing shoes. I was covered in mud and had to wipe some of it off.

I was pretty tired going into the run. I had that lead leg feeling. I had practiced quite a few bricks of bike/run but that feeling slowed me down as I hit the trails. I had to pull my legs through the run. I ran slow- a lot slower than I wanted to be. the 2.5mi trail run took 31:10. The fact that my run was slower than I wanted and the fact that I was exhausted didn't stop me from being so excited when I hit the finish line. Through the whole run I kept thinking just finish and you will be a triathlete. My cheering section errupted as I came to cross the finish. I wanted to cry but I was so excicted! I had done it! In 1 hour and 27 minutes I had finished my first triathlon! What a feeling of accomplishment.


As I stood talking to everyone the awards ceremony started. I was just happy to be a triathlete and be with my family/friends. I didn't think I had done well enough to get any award. Dutch told me to put on my shoes and shirt. We walked over and I couldn't believe it- I got 2nd in my division! 2nd?! Honestly- I didn't believe it until I saw the results online. I then checked how I would have performed in my age group.I would have come in 1st in my age group by 3 minutes! I can't believe it. Not only did I finish my first triathlon I did well. I really can't wait for next season. I plan on starting the season with a sprint or 2 or more and working my way up to an olympic distance. It is so fun why not right?!

Now onto the next challenge!

Posted by DoubleDathlete at 11:55 AM No comments:

Been a while- Training and Chicago Triathlon 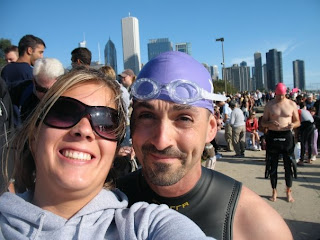 Lots to update, I have been a bad blogger lately. I have been traveling a lot and I will use that as my excuse ha ha ;-) Weeks 5 and 6 went fairly uneventful. I was on the road for week 6 so hotel gym tread mils and bikes. I did however get to meet up with some of my twitter friends to run a track workout while in Missouri. That was a lot of fun. Although I think I enjoyed the post workout beers more! When I returned from Missouri I unpacked my bags did laundry and repacked.

My friend Dutch, in the photo above with me, had won entry into the Chicago Triathlon from the nice folks at Polar (heart rate monitor company). I offered to hop on a plane and use all my banked hotel points to be his personal support group! So Friday morning we jumped a Southwest flight to Chicago. We had reservations at the triathlons host hotel, Hilton Chicago. It was nice. Friday night, Dutch unpacked his bike and put it back together. His nice brand new tri bike got scratched very badly by TSA- but that's a whole different story! The race expo also opened Friday night.

As someone new to the sport it was a great experience. I got to walk around with other athletes and learn about coaching, buy some tri shorts, and new swimming drag shorts. I learned a lot about different fuel and shake options, my new fav... Mix1 www.mix1life.com it has a great flavor and texture- check it out! Anyway- I loved the expo's vibe and just being around other people that have the same interest as you!

Saturday we scoped out the race area and transition area. And I dragged Dutch for a bit of site seeing. I only had a couple things I wanted to see in Chicago, the cloud being the main one! We walked around Millennium Park and got a great feel for the city. Then Saturday night I did a great 4 mile run around the parks again! Nice and flat and cool by the lake. I like that city a lot!

Sunday morning was race day. I went with Dutch at 4am to set up his transition area. Urgh- did I want to stay in bed soooo bad! But good experience to get out there and get a feel for this whole thing. We set is all up and since his wave didn't go till 9am we went back for a nap. I slept for another hour or so and went down to the swim start with Dutch. He was all lined up and ready to go I told him I would either see him at the swim finish or the transition area.

As I was standing watching the other athletes already in the water, I observed 2 things 1.) I have a serious advantage in the swim portion, most triathletes look like they are drowning in the swim and 2.) Dutch was now doing the Olympic distance event. I knew the sprint swim only went along the lake wall and he was facing the direction of the Olympic distance! I freaked out! Being his swim coach for this triathlon I knew he could do it but the swim might end up taking a lot out of him. ~for those that don't know an Olympic distance is 1.5km swim, 40km bike, and 10k run. DOUBLE the trained for sprint distance~ I knew the bike and run were going to be easy for him unless he pushed too hard on the swim.

When I discovered this GIANT mistake made by the race production company, I raced to be at the fence at the swim finish! I knew I needed to get there and be sure he was okay. 45 min later he got out of the water... I screamed you are doing the international distances! He responded with "I am now!" and we both ran to transition. I yelled over the fence as he got onto his bike and was there when he came in from the bike at 1 hour 18 min. I raced to be at the transition fence again to be sure he was going to be okay for the run. I can't believe it but he did the 10 k in 50 min! He ran 8min miles! He didn't even train for this event and he KILLED IT! 3 hours and 9 minutes was the final result.

I have to say as a first time triat hlete it was a great experience to be there supporting a friend.I got to enjoy the event, well kind of, my nerves were pretty shot at the end! I also, got to learn a lot of new stuff about my new found sport. It was a really cool experience.
Posted by DoubleDathlete at 12:40 PM 3 comments: