Why I finally joined a Triathlon Team.....

After completing 7 half iron distance, racing at Nationals and countless sprint olympic distance races, where I sometimes was self coached and sometimes coached from a far, I finally broke down this season and joined a triathlon team. Why you might ask? What  would possess someone to join a team after going through all the training and racing alone for many seasons? Honestly I was ready to change it up.

This season I will be tackling another 3 70.3 distances and oh wait theres that little thing of I am running a marathon again. I needed some new motivation to get me through what was going to be a long season with some serious training.

So there is a local team near me that actually is a race director too. I looked over their team calendar. I had done a few of their races. Asked a few questions and before I knew it I was talking to my coach about adding this to my training. She 100% agreed it would be a good new add to the training. So I paid the money and I was in. Perks include: race discounts, team support at races, team workouts and built in training buddies. So far I have done a few open water swims. It has been nice to get that in my training this year. Usually I am 100% pool swimmer then race day I am trying to get used to my wetsuit and my sighting. I also tried the team bike time trial this week. More on that another day.

My team is MRA multisport- if you are from the area def check them out. The races are great! And there are plenty of training opportunities that you don't have to be a member for.

Posted by DoubleDathlete at 9:29 PM 26 comments: 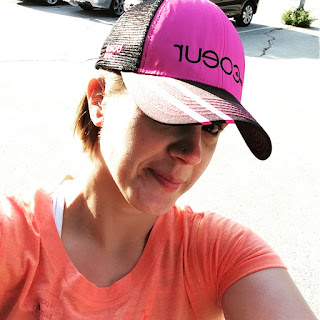 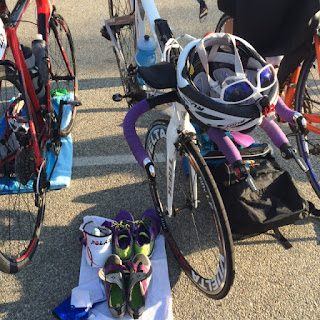 I have some big plans for the 2015 Tri season- and yes they scare me a little! So it was time to start the season. A little later than usual. I joined a local tri team (more about that another time) and they are also a race management company. So that with the fact that the first race they do is literally 10 min from my house and at my gym I signed up. The week of the race my coach took the workouts down a bit. I wouldn't call it a full blown taper but we did a little less than usual like 5 hours of training. For some reason when I ramp down training I seem to ramp up the race nerves. My swim on Thursday had some race pace 50s and I started getting really nervous!

Saturday evening we drove the bike course. I wanted to see the roads from our terrible winter. And boy were they bad. The course was hilly. Which is to be expected in that area. It occurred to me it was going to be fairly technical for the ride, given the turns, hills and potholes. I was going to need to keep my head in the game on the bike!

Alarms went off really early Sunday morning- 5am- oof! I had a cup of coffee and my usual pre race oatmeal. It was a chilly 40 something degrees out. I knew the water was going to feel warm at 65 but I was not going to feel great riding in that air temp. Packet pickup was smooth and everything set up in transition. Said hello to some team mates and co-workers that were racing and quickly it was time to suit up! GULP!

Swim- .5mi (actual .7-.8 by people's GPS)- Goal: 20min- Actual 18:24
I love that MRA does everyone sings the National Anthem. My nerves were killing me as I stood there and looked at the swim course. It wasn't the usual wave starts. MRA is trying to help the folks that are scared of the swim by doing a TT style start, sadly it takes away my advantages in the swim. Every 3-5 seconds 2 people are put in the water. Though there is no break between the Men and Women starting other than the 3-5 seconds. So when I started as one of the first women I quickly ran into the slowly seeded men. Faster than the usual, getting no clear water before I was bumping shoulders and running into feet. I passed blue caps (the Men) through the whole swim. I didn't see any Pink caps (Women) go by me. So imagine my surprise when I arrived in transition not as top woman!? I think some folks were a little confused by the bouys and didn't get in the full swim. But there isn't much you can do about course cutting in the water. But I did talk to the race director and he is going to work it for next year.

T1- 2:10
Urgh- wetsuit would not get over the time chip! And I am rusty! So glad I went sleeveless this would have been even worse!

Bike- 16.5mi Goal: 45-1hr- Actual: 55:59
It was just as technical as I expected. My head was on the whole ride. I only turned it off for a brief moment when I hit an area that had recently been paved. I distinctly remember telling myself okay you can turn your brain off for a couple minutes. Somewhere around mile 5 I dropped my chain. I couldn't grab it on the bike so I quickly hopped off and got it back on. I tried to push and occasionally I would have women around me to get me to push past them. I had a couple actually pass me and stay past but for the most part I was able to pass a couple too. When I reviewed the data I am happy that I was avg a little over 17 mph on a technical course. 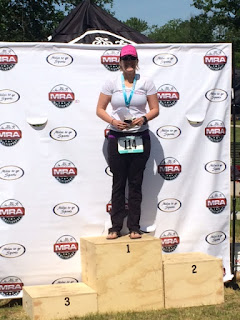 I came into T2 and I was really cold. The fronts of my thighs had that cold tingle and my feet were frozen. How is this possible I just pushed a hard technical course for almost an hour? So I had to fumble with my shoes a bit.

Run- 2.5mi Goal: 20min- Actual 21:34
I started out the run course and my frozen feet were giving me trouble. So were my frozen legs. My hamstring started cramping from the cold. I just tried to keep pushing through. Within the first half mile we were running (aka walking) up a set of stairs and climbing a NASTY hill. So much so my first mile was 9:22. I tried to push it but it was tough. I passed a couple women on the run. And no women passed me. I had a couple guys get by me like I was standing still! The second half of the run was downhill or flat. So I made up time there. I was happy it was only a 2.5 mi run and not 3! I don't know if I could have kept it up for 3. Luckily when I finished my legs weren't cold and I could feel my feet again!!! 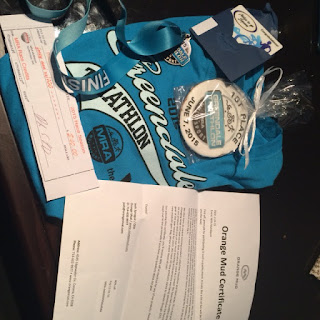 As I came into the finish I had in my mine a 2hr race for some reason. I was happy to see the clock being somewhere around 1:45 (reminder TT start). Actual finish time was 1:40.12. I was happy with it. I had no idea where this put me in the field. I knew there weren't too many women ahead of me. I hung out with friends and mulled around the finish. I was happy to see I finished first in my age group and 9th Woman overall. MRA gives out these great awards- you get race credit 40 bucks. And a few other gift certificates from sponsors. And this awesome first place age group cookie. Do I eat it? I say no. 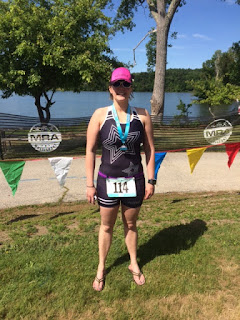 I love my new Coeur kit.  I got called a rockstar probably 5 times on the course or after the race. It reminds me of my old punk rock skater chick days as a teen. It fits great and no chafe! WIIINNN!!

Posted by DoubleDathlete at 6:17 AM 5 comments: