This year will be the 3rd year in a row I have prepared for Timberman. I know the hotel, I know the course, I know the race day ritual. Geesh my parents have even been going long enough to find a "better" hotel to stay at.

To be honest this will be my 5th 70.3 distance event. After 3 times on this course and 2 Quassy course races I am fairly certain I will finish on Sunday. There is one thing that has eluded me in every 70.3 I have done. That is RUNNING the half marathon. And before you make the crappy comment I have heard from many people YES I can run a half marathon. I have completed plenty of stand alone half marathon distance races with a PR 2:02. But that isn't doing it after swimming 1.2 mi and biking 56mi. I had hopes that I would run the whole course at Quassy this year. But thank you to the insane weather that came in making it so hot I didn't have much chance.  I did shuffle more than I did the year before though.

Running the half marathon at a 70.3 has been one of my big goals for this season. Honestly I don't care if it is slow I just want to be able to be honest with myself and say YEP I  Ran it. I have the plan of letting myself take a few steps (maybe 5) while taking on fluids at aid stations- if needed. And honestly- I can't run and not spill coke down my chin and chest. I plan on grabbing coke and boob ice. My plan is to get in my zone not look at those walking around me, maybe use my visor tactic from Quassy, and race my run.

Posted by DoubleDathlete at 10:15 AM No comments:

I swear I am NOT Cherry Picking! 3rd!

For those of you that aren't familiar with the term cherry picking it is choosing races based the ability to end up on the podium. After having a great race the weekend before at Mill City Olympic. I really hadn't planned on racing at all until Timberman in late August. A friend offered me a discount code to race, it was far away and we had just raced so we had decided we wouldn't do it. Then Saturday after not having a particularly good week, we pulled the trigger and registered. 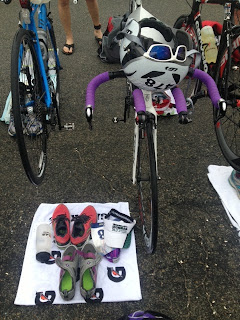 Sadly it meant a 1.5 hour drive to the race. We got there and the registration we had done at home hadn't registered with the race director- but luckily he squared it all away. D and I ended up with race numbers right next to each other- this NEVER happens. We actually commented how strange it was to be setting up just across from each other. It was nice we parked close and had time to catch up with the friend Kim who had given us the discount code.

D's wave went off before me so I knew I wouldn't get to see him again till the run or the finish. The swim was a beach run in to the water. IT WAS ROCKY! Luckily the water wasn't as cold as I figured it would be. But it was a choppy swim. I think because it was so sort and in a small triangle I was bumping people the whole time. I felt like I never caught clear water. Which explains the time 8:19 for the 500m swim.

T1 was a rocky run out of the water and a long run up a short hill to the transition. I did something I have never done before... I peed. Right there in transition as I took off my wetsuit. I had to pee in the water and as I said I couldn't get clear water so I couldn't calm down to pee. Threw on my bike gear and headed out 1:21.

It started to rain as I hit the bike course. I knew the course was PANCAKE flat so I just decided I would hammer it. I have never passed so many people on a bike course. Guys were getting mad that I was passing them- I felt like I just kept saying LEFT. But I just wanted to have a fast bike split. I even used the new bike skills D taught me and passed 2 women on road bikes up the tiny hill in the course. One of them re passed just as we hit the horrible stretch of road into transition and there was no passing. I kept an eye out and saw Kim in front of me going into transition. 11mi ride 33:08 avg 20mph?! wha?! Had a half sleeve of blocks.

Kim and I exited transition at the same time and we joked we would get to run together. I kept an eye out for the woman that had re passed on the bike but she was behind coming out of transition. 50.5 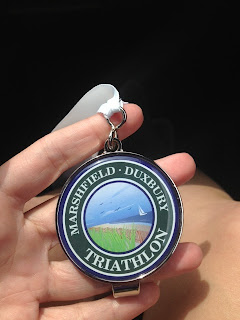 As I started to hit my stride on the beach run Kim said go. I tried to encourage her to come along. I could see what I thought was the turn around- as I got closer I saw it was the aid station. I saw D pass on the other side. He gave me a big smile. Finally out of the fog came the turn around. My legs were starting to feel the run in the sand. The run was beach at somewhat low tide. I grabbed my gel right before hitting the aid station again and took a swig of water. As I came closer to the finish a guy came up next to me and told me "You know if a Male and Female cross the finish at the EXACT same time the tie goes to the Female?" I said "how chivalrous." He said "Let's go!" And he pushed me to finish with him. It was a nice little KICK at the end. Run 3mi 26:14 8:44 pace. 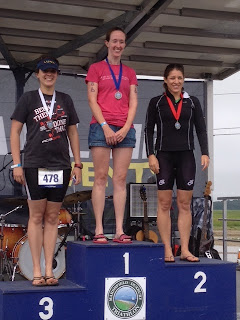 When I crossed I checked my results at the timing trailer. OMG 3rd in my Age Group! I was the 26th Female! I came in 116/383 overall. I was psyched! I hadn't even thought that was an option at this race. In looking at my results I took 4th in my division in the swim, 2nd in my division on the bike, and 8th in my division on the run. Well that reads to me like the off season time on the bike paid off and the time spent learning bike skills from D. Now it is time to focus on the run. I knew I wanted to focus on the run for Timberman but this confirms it!


We took some fun pictures at the end. And headed to a FABULOUS Brunch spot in Marshfield- Arthur and Pat's! That was a WIN!!! 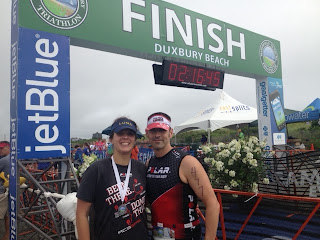