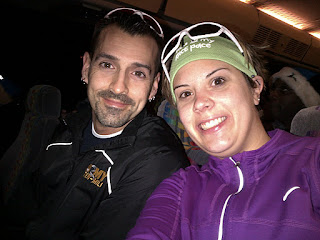 (pre race on the bus heading to the race)

To be honest I have been holding off on posting this race report because I didn't know how to write this. Lets start with this- I had hoped to finish around 93 minutes- that would be a 10min pace. Figured that would be pretty good for me. Finished in 1:34 so pretty close and I am happy with that given the race issues.

Lets get into that. We flew down Friday to do our packet pickup- took a very expensive cab ride (thanks D!) out to National Harbor. The jacket sizing was a mess and we finally got the right sizes then realized even though we had received a corral assignment they were not on our bibs and had to go back in and fix that. Spent Friday night with my Aunt and Uncle who graciously hosted us at their house. My Aunt spent the night trying to convince us that a run along the Patomic would be so much better than getting up at 4:45. (we should have listened!)

Since we signed up for a shuttle from Crystal City to get us to the Harbor start line we arranged for a 5:15 cab. The cab driver was a lovely gentleman, by which I mean I was subjected to an early morning death metal concert in his cab where he told me he would die if he tried to walk 15k. This is where the day started to go wrong!

We loaded a shuttle quickly and she headed us toward the harbor or so we thought... after getting lost 2 times and 2 u-turns and some very interesting driving we arrived at the "plateau". The start area. It was about 6am at this point. The race was supposed to start at 8. The wind was howling and there was really no where to stand to get warm. Warming tents would have been nice!

Since we got up early and I know myself with fueling I had planned to eat oatmeal w almond butter at 5. A protein shake at 6 and at 7 shoot a hammer gel before the start. I followed that plan.

We met up with some friends and all hung out talking about the mess that things seemed to be this morning having no clue how bad it was going to get. We heard announcements about traffic issues and heard the 5k start about 40 min late. No one told us what was going on with the 15k. With it becoming obvious we were not going to start at 8 somewhere around 8:15 they moved us to corrals.

We stood in corrals till 9! No updates- no planned start time. NO NOTHING! I knew my stomach was not going to cooperate with the new start time and I was down to the pack of chomps I had for during the race. I figured wait it out eat the chomps as you run. At 9 ish we started- the course was awful down and back for 3 miles with hairpin turns on one lane of an open parkway! Anyone else read that as- NOT SAFE?! At about mi 3 the lack of fuel kicked in. My brain went okay don't usually eat this early but today we are gonna... slowly eat the chomps so you a have enough and over the next 3-4 mi I ate the package. I grabbed gatorade and water at the aid stations that actually had it- yes some had no water or gatorade!

The hills on this course were awful. I had no idea the first 2 or so mi were downhill until I was looping back on it- going up! We all then realized when we came back down that we were going to have to go up a hill to the finish! OMG really?! finish on a hill? We then looped out to a part of the harbor- again HILLY- and then hit 2 off road sections, one was a loop and the other a 2 person wide path for close to a mile of the race. My hip doesn't deal well with running on unpaved paths- its similar to sand- the running is like me being on a balance ball and I have to work twice as hard to stabilize. Guess I should get back to some PT exercises to help this if it ever happens again.

At this point my hip is hurting and I know I have to go back up that hill. My heart rate sky rocketed but I just wanted to be done and I knew I was close to my goal time even with the logistics/course mess! When I came to the finish I couldn't even cross b/c there was a backlog of people. I found D and my friends and just shook my head they all burst out laughing because they felt the same way.

We headed to get our promised TONS of chocolate- we were only allowed one container with a little dipping chocolate and 5 things to dip. One coco. Not a SINGLE chocolate bar to be had! Every time we tried to stop to enjoy our fruits of our labor (running 15k) we were yelled at by volunteers to keep moving! Finally we had had enough. Our friends headed home and we tried to get in the shuttle line. The line was at least a couple hour wait. We decided forget it lets get on a metro bus. Unknown to us the metro suspended service to the area. Now it was 1pm we were cold tired and hungry. We got in a cab and headed back to the house. It ended up being a mess of a day. 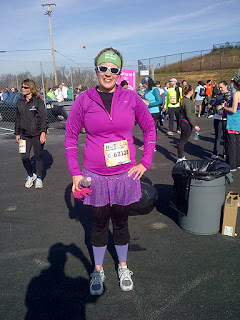 After taking a nap I quickly realized how outraged the other runners were, there was a facebook page created, and a post on the Washington Post just to name a few. People's blog recaps explain a lot of the issues. A email from the race director followed on Sunday filled with excuses and shed light into issues I didn't even know happen- like the lead cyclist of the 5k took them in the wrong direction resulting in a 3.3mi-5k. I will never again sign up for an event by RAM racing- and I don't suggest anyone else reading this does. As of 5 Dec 30 complaints have gone to the better business bureau against RAM for this race. Everyone is demanding a refund- there's even a petition on change.org. I'd like my 65 bucks back please- you did NOT provide the services you said you would! 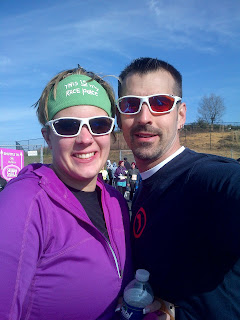 (D and I while getting ready to find an alternative way home- shuttle FAIL!)


We did have a good vacation down in DC following the race- here's one of our touristy photos ;) 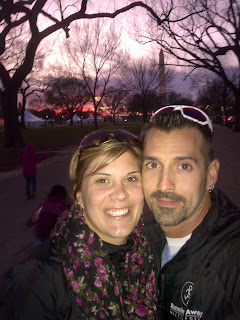 Posted by DoubleDathlete at 11:36 AM