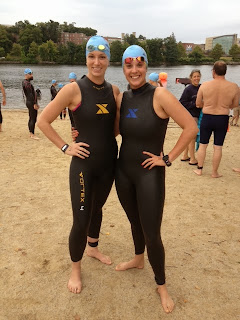 So in my previous 2 race recaps I talked about 5 weeks of racing but I had left out the swim race recap thus far... UNTIL NOW! ;-) Honestly I love OWS races. It is my thing. This is my 3rd year of the Mighty Merrimack. Last year I won- so even with the already planned tri's I was contemplating going back to defend my title!After everything with D crashing at Timberman and the mess of a week leading up to and racing at OOB, I had written off spending another entry fee. Then in a very sweet gesture for taking care of him while he was injured D bought my entry to the swim. He wanted me to go back and defend my title. OH okay if you insist! Haha ;-)

I convinced my friend Jen to join me. She raced it with me last year and had won our age group. D played support with his still healing rib. The water was pretty chilly. I went sleeveless but I could have gone with the full sleeve wetsuit. Swim only races can be interesting. There are usually a few crazy fast young swimmers who show up. Lucky for me most of them don't own or wear wetsuits.

We headed off and D walked the whole wall along the course with me. I could hear him screaming when I was taking a breath. As I hit the turn around I tried to draft off the guy next to me and he pushed me off after a couple strokes. Okay fine I get it we are out here alone I'll leave you alone. So I took the lead hitting the turn around. And luckily the swim back is with the current so I always make up a bit of time. 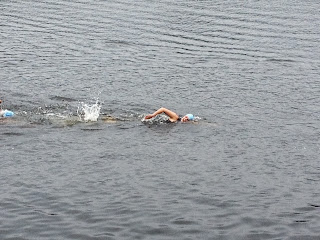 Then all of a sudden I felt it, if you are a swimmer you know what I mean, the guy behind me hopped on  my feet. That bastard wouldn't let me draft him for more than 2 strokes and now he his hangin off my feet. I was pulling him along. SERIOUSLY?! I could hear D screaming on the wall, I had no idea what he was saying. I knew the course well and I could tell from the things along the wall I was getting close to the finish so time to find that other gear. 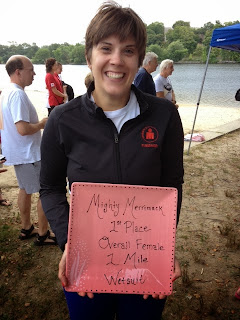 I dug in and found it. Luckily my leech behind me didn't have it and I lost him. 1 male finished before me in the 1mile wetsuit. I got first female in the 1mile wetsuit, with a time of 30:22. Not my fastest 1mi swim but I always seem to think the course at Lowell is long. A minute faster than the year before. Jen even came in second female wetsuit! YAY! So happy to repeat and thankful for the entry!


After we went across the street for a bite to eat. I decided to jump in the kids rides outside and I have not laughed that hard in a LONG time! 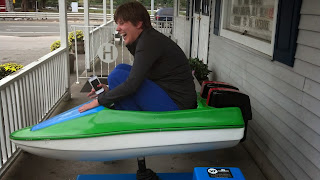 Posted by DoubleDathlete at 10:59 AM