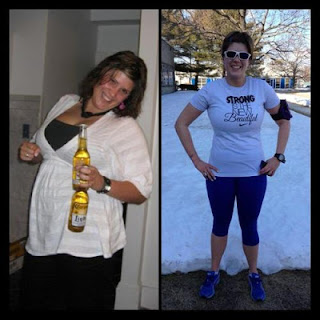 I recently posted a picture on facebook and twitter of me in 07 and me now. I often forget where I came from to get me to where I am today. I figured I would write my story down for others to see. I realize I don't think I have ever really sat down to explain it all.

When I was a kid I started competitively swimming at age 6. I loved to swim. I was an active kid. I danced right through middle school too and was pretty good. When I was in middle school swimming and dancing were my thing until my dance teacher informed me I would need to decide between dancing and swimming since swimming was giving me a different body type than I needed for dancing. Well even at that age I had enough sense to realize I was a better swimmer so I joined a USA swim team and swimming became my life. 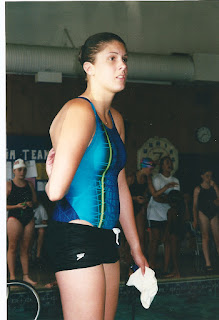 I went to a private high school where if you weren't on a sports team you weren't in the in crowd. I did some cheerleading and a season of cross country but I really loved swimming so that was my focus. I had a great coach on my USA team. He really motivated me. I would get up go to morning practice then drive to school come home do homework and go to afternoon practice. All along no one in my school had any idea so I was just the smart kid at school who didn't really hang out with anyone there because I was so busy swimming. I had friends on the team and I spent every weekend at meets and most of my free time was spent at practice. I missed nationals in the 50 free by .04 seconds my senior year. But this didn't ruin swimming for me.

Mind you with all this swimming I could pretty much eat WHATEVER I wanted. I was in practice for an hour or 2 in the morning then after school would have an hour of dry land and followed by 2 hours in the pool at night. When you are working out that much and you are a teenager you eat whatever you can!

In my senior year I decided I wanted to be a Chemical Engineer and I needed to go somewhere with a swim team. I knew I would be a bottom of the barrel Division 1 swimmer or a top Division 3 swimmer. I decided to do Division 3 also knowing I wanted to do engineering and Division 1 swimming wouldn't leave time for that. I decided to go to WPI. The WPI team turned out to be so much easier than my USA swimming years. We swam for 2 hours a day. There was no dry land practice. I kept eating whatever I wanted and not having the same work out routine meant I wasn't keeping the weight off.

I also found in college I liked to go out and drink with my friends, which lead to late night Chinese food and pizza. I kept eating like I was swimming all the time but I wasn't. My sophomore year we had a new coach come in. And my sophomore year was the hardest year of my Chemical Engineering classes. Swim season span 2 terms and the first term I failed a couple classes. I went to my coach and told her I would need time to study. She didn't understand why I couldn't figure out how to swim and pass my classes but reluctantly let me miss practices to get studying done. Well that lasted a week or 2 and when the season was over I had 3 classes I needed to make up. I went to the coach and told her I couldn't swim and fail classes. I had to quit. I knew I wasn't going to the Olympics and it was time to focus on school. School that would ultimately lead to a career.

Well with even more time I spent more time with my friends and went to parties since I didn't have any season commitment for swimming. By the time I graduated I was so out of shape! After college I spent most of my time with friends and going out and having a great time. I started dating a longtime friend and he moved in. After a year or so, while I was at work one day, he packed up everything of his, including the mattress from my condo and moved out. I never heard from him again. I was devastated.

In my horrible state I remember my father had a couple suggestions for what to do with myself. 1- go get an awesome new car 2- get yourself a personal trainer. Well I decided to get myself a personal trainer. Being 3 years removed from college I had put on plenty of weight and felt horrible about myself. I started to hit the gym for a couple weeks then got myself a trainer. I think at this point in 2008 I was 230 lbs. 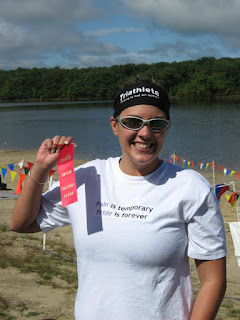 My first session with my trainer kicked my ass. I actually spent the later part of it huddled over a trash can trying not to puke. For a year I worked out with my trainer and tracked my calories. I got down to 170lbs, counting calories, weight lifting, running and swimming again. In April 2009, I convinced my parents, both of whom jog, and my then best friend D to run a 5k with me. It turned out to be a horrifically hot day but I ran the whole thing. I think I was hooked. I started to look into triathlons. I knew how to swim, and I could run a 5k. How hard could it be to learn to ride a bike again.I signed up for an off road triathlon in Sept. I used the triathlete bible and started coming up with a training plan.  D helped me out with cycling skills and even lent me a mountain bike for the training and race. I finished my first triathlon and came in 2nd in my division. I think the ribbon I got cemented me in triathlon. Following the race I signed up to run my first half marathon in Atlanta in November. I flew down and ran with some friends.

Somewhere in the middle of training for my half marathon I ended up with some severe hip pain. After I finished I finally got an MRI and found I had torn my labrum and needed to have surgery. In April 2010 I had my labrum tendon repaired and my femoral head shaved. I spent months recovering and whining to D that I would never walk again never mind train. I thought it would end up like "What's Eating Gilbert Grape" and I'd have to be cut out of my condo. Obviously that didn't happen and at the end of the 2010 triathlon season I did a couple aquabikes, swim then bike. 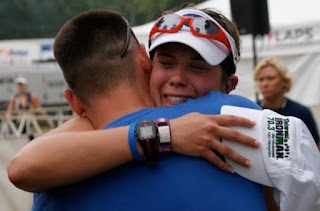 With some apprehension, in the 2011 season I took on what I would say is the biggest challenge yet a half ironman. The whole season of racing and training was focused on the goal of August 18 2011 swimming 1.2mi, biking 56mi, and running a half marathon at Timberman 70.3. I finished just before they shut down the course due to weather. The flood of emotion of excitement, pride, and genuine shock when I crossed the finish line was amazing. When I hugged D it all came out in tears and "I DID IT! I DID IT!" 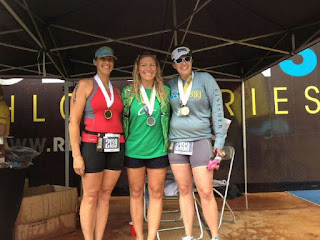 All through the training I wasn't too conscious of all my food choices and I put back on some of the initial weight I had lost. D warned me that crossing the finish line of a half ironman wasn't going to take away the weight loss demons. He was right. In 2012 I trained for and completed 2 half iron races including a second trip to Timberman where I took 30+minutes off my time. But I was still not happy with my weight. A friend offered for me to join her biggest loser competition in Jan 2013 and I have dropped another 10 lbs. I am not 100% happy with my weight but I am getting there. I don't have a specific weight number in mind but I just want my belly to go away!


This season I will be doing the same 2 half iron distances just 10lb lighter! My coach keeps telling me that I will see the difference. I hope she is right. I plan to keep up on the tracking my calories and be better about my weight management this season. I think this will lead to being a better place mentally and hey maybe it will shave some more time off to get me to that 6 hour half ironman!

Posted by DoubleDathlete at 10:42 AM