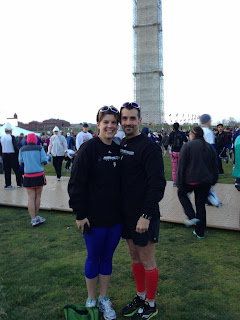 D and I had gotten smart this year and registered for the Cherry Blossom 10 miler lottery as a team- that way if one of us got in we both got in. We made plans to fly down Friday and spend Saturday doing as little as possible then racing Sunday. The expo was a pretty good one, I had no problem picking up my number.

While at the expo I realized I was seeded with my Army Ten Miler time from this past year of 1:39. I had hoped to shatter that with a 1:30 given the past couple races I had done. I wish a race would let you re-seed, but D convinced me that I am not the average runner dropping time like that. Luckily a friend of mine that lives down there Emily was going to be running and felt comfortable with the 1:30 plan. I was really excited to have someone to run with. 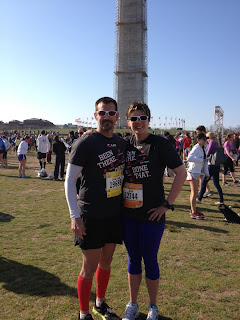 Emily and I stayed together for most of the race. At times I was in front and at times I was chasing her down. It was great to have someone there to come up and say hey you doin okay? Somewhere in the last couple miles Emily caught up to me after she pulled off for water. She asked how I felt. I told her it was all setting in. She was like well we have less than 2 miles its gonna be close. And said something to the effect of whether we make it or not we raced hard. Well I don't know what it was about that statement but my brain switched. I went nope- this one I am leaving it all on the course to try to make that 1:30. I was tired, my legs were really starting to feel the speed/up slow down of the first mile, and my tummy was still a bit icky but I was gonna give it what I had left. So I dug in when we hit the little hill near the finish. SO CLOSE to the 1:30. The final time was 1:31:08. Emily said I must have found something when we hit the hill. I just told her I wanted it to be over! I must have left it all out there because when I crossed the medic asked if I was okay. I responded with a smile and yea! Next race I won't be forgetting my immodium either! 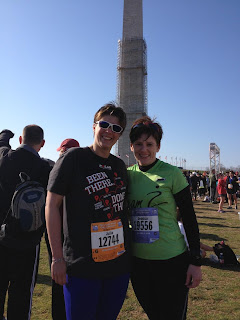 I can't be upset that was an 8 min PR! But I so wish it had been that 1:30! SO CLOSE! I know that my times are continuing to drop thanks to dedication to my training plans and the fact that I dropped 15lbs. I am proud to say I can now run 10miles with most of them in the 8min mile range! D had a great race too- finishing matching his time from the Army Ten Miler! I wish I had that speed!


Posted by DoubleDathlete at 12:50 PM