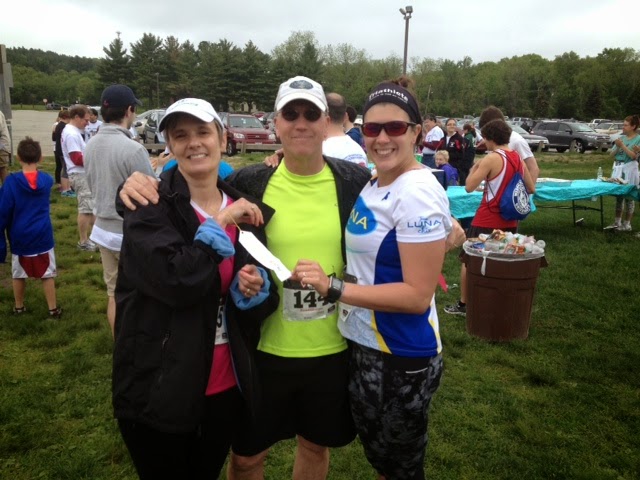 The week was kinda crazy weather. Thursday's track workout didn't happen due to some storms. And Friday we actually took a break from workouts and got in some movies. I made sure to get in the 3 hr ride I had planned Saturday. Though again the weather didn't behave and I was stuck inside.

A former swimmer of mine and her family put on the 5k so it is a thing I make sure I do every year- if possible. Last year it was the weekend before Quassy so I ran with my mom, which was fun. This year I convinced my parents to come again. D and I went out for a mile warm up. Talked through the course. As we lined up I tried to push the tall guy who looked super fast to the front line in front of me. The plan for this race was to see what I could do for a 5k. After Jay Lyons where I hit a new PR but I beat it a couple weeks ago at Season Opener- after the swim and bike- so there was definitely room in there to push further. 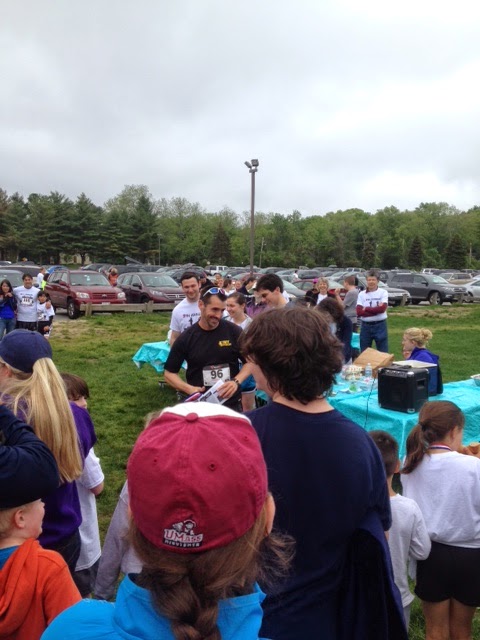 The course is relatively flat. Or at least that is what I thought. The gun went off and I could actually see the fast out front guys and kept D in sight for probably the first mile. I hit the first mile on 7:49. I was feeling pretty good. The second mile it gets a little hilly. I stayed right at 7:50. Consistent. I was trying to make sure people weren't passing me but I was hunting folks down. The last mile has a couple hills in it and when I topped the second one I had to hold back on puking! Guess that is read line! Pace dropped to 8:36. Those hills bled off the speed.  I passed a woman right before the turn to the finish but she re-passed just as we were finishing. I just didn't have the last kick. I crossed and I was so excited to see 24:16!!! I am finding a new level of speed.

I am not used to it. It feels like an out of body experience. Like I am watching myself run that fast. Like I look down and it isn't my legs attached to my body. It is very different!

My Dad took second in his AG. Mom took second in hers. D WON his! It was awesome! I would have been 3rd in my AG if they had taken the woman that won overall out of the AG awards. But that is okay. That new found PR is a HUGE reward. It def takes a GOAL off my list!!!

Posted by DoubleDathlete at 12:33 PM