At some point in 2009 I got the wild idea to do my first 5k. I found a local race dedicated to one of the firefighters that was killed in the horrible Worcester Cold Storage Fire in 1999. I somehow convinced my then friend, D to come out of racing retirement and join me. I even got my parents who run regularly bur hadn't run a race in a while to come and run. The race starts at 2pm. It is late April every year so usually that is when it is finally warm. That first year we had unseasonable heat- 90 degrees. But I finished. I remember I didn't even walk- my parents and I crossed together in 32 minutes.

In 2010 I had to skip the race since it was right after my surgery but I was there on crutches cheering for D. In 2011, D was in the middle of preparing for Boston so we skipped it. In 2012 I ran a 28:18 and last year I had to miss it for the Wallis Sands Half Marathon but I was there again to cheer on D as he ran.

This year armed with a new coach I prepared for this race to be a new PR. Knowing the course I knew it would be a struggle but I wanted to see what I could do and I didn't make any excuses for the fact that I may not hit the time we had hoped. I ran my track workout Thursday in preparation hitting 2:00 400s which is a 8:00 pace. I felt like it would be do able but I still had a bit of butterflies in my stomach. 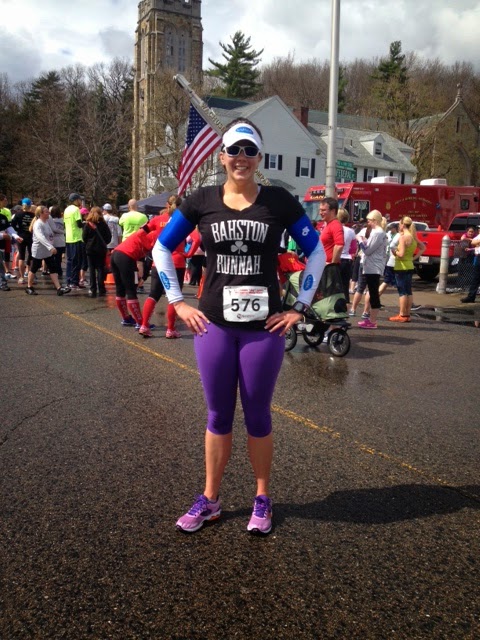 My parents arrived at my condo before the race which was again a 2pm start. My dad said he was going to try to keep up but wasn't sure if he could hold up with the speed. Sadly our spring hasn't been great and it was another gloomy rainy day. We picked up our bibs and race shirts and D and I went and ran for about a mile. He gave me all the site pointers for the race. Uphill climb from the start for about a 1/2 mi then it flattens and turns right. Down hill then a right turn to flat main road. Then right turn by the stadium and up 3 intersections. At the top of the hill 3rd intersection turn right. Continue to climb a bit to the next right at the rotary. Flattens out then as you hit the tree and bus stop you can feel the downhill and see the finish.

I knew adrenaline would carry me up the first slight climb. I was feeling good when I hit the down hill and the flat. Dad and I were running together. We looked down at the watch and we were sub8. Well I was worried if I went out too fast the hill at the end would get me. I tried to throttle it back to 8. As we hit the flats 7:30 was actually feeling okay but I knew to save it. I wanted to hit 8:03. First mile ticked off at 7:54. Okay under is good. 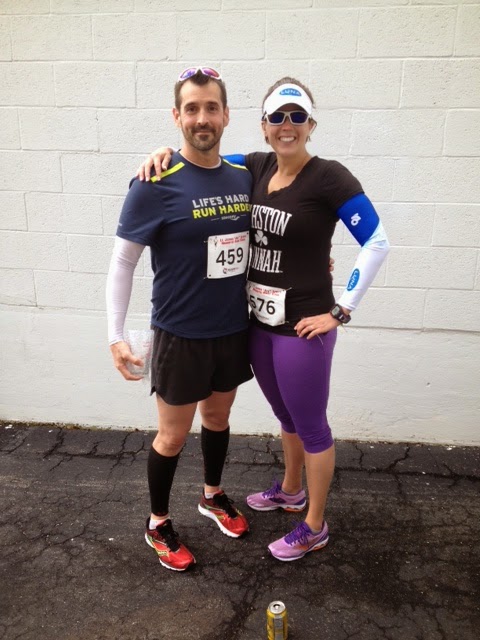 As you hit mile 2 the climb comes toward the end of the mile. Still feeling good and somewhere in here I lost Dad. He stopped to take of his jacket but I didn't want to stop. 7:54. Okay here comes the hill. I know it is a long slow climb and you turn and there is a bit more of climb. Mile 3 8:00. As I came back toward the finish I saw the tree leaning over the road and the bus stop. Down hill from here. And there was D screaming come on Jul pass her! Apparently she shot him a evil look as I motored past her. FINISH TIME: 25:27 course was a little long 3.22. My watch said an avg pace of 7:54. But if you do a true 5k it is a little over 8 min pace.

I was shocked when I saw the result. I knew I had dug deep. I was starting to understand what running at max effort felt like. As soon as I dropped to 8:30 I could take deep breaths. So now how do I learn to not need to go to 8:30 and stay in that shallow breathing and motor though. My dad finished a couple minutes behind me. He was proud I had beat him. Mom finished her first 5k under 30 min! It was so exciting! Def a good day!!! 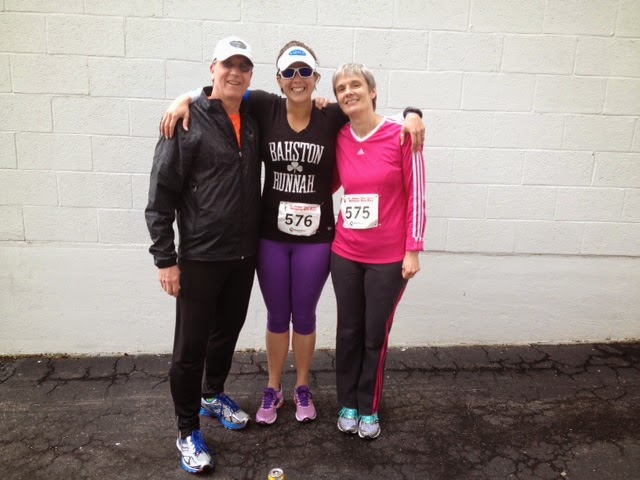 Posted by DoubleDathlete at 12:42 PM