Season Opener- Tri Season is Back!

I always sign up for New England Season Opener. The water is always cold. The bike course is always bumpy and hilly. The run is always tough. This year with our SUPER cold winter the water was looking EXTRA cold. 55 degrees was reported all week. On Thursday, I got a wrench in the works. The course I always use to measure my level of fitness for the year was changed. The 10 mile bike was a new 8 mile bike. And it was roads I knew were going to be more hilly than the 10 miles. Cue the triathlete freak out!!! 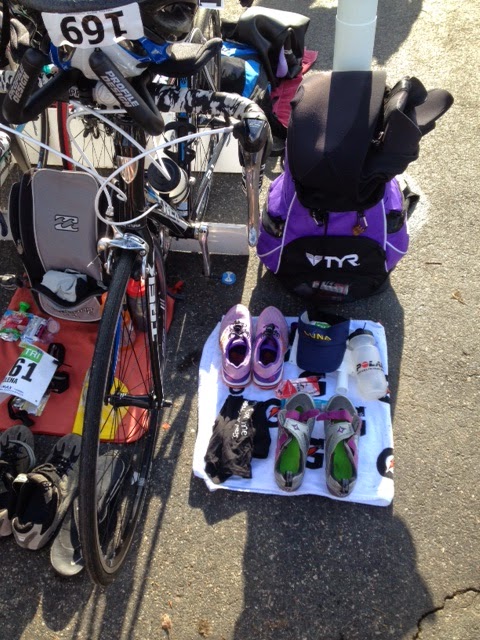 Luckily mid pre race freak out my coach happen to be in town for a clinic. I got to spend Friday night with her- talking about the season talking about the race. We even got in a short run together. It helped the nerves a bit. Until Saturday at packet pick up. I woke up Sunday morning more nervous than I have been for a sprint since my first! I knew I would finish. I was worried about all the changes and worried that I wouldn't throw down what I was capable of. The plan with my coach was get through the cold water swim. Survive the even hillier bike. And to quote "run like a pitbull was chasing me"!

I tried to stay calm- but I was really freaking out! I talked to friends. Had D give me my pre race talks. I racked up right at the end of my rack. I was so worried all my hard work wasn't going to show. I was going to do my best tho! This was going to be my first season opener in my age group- not athena. 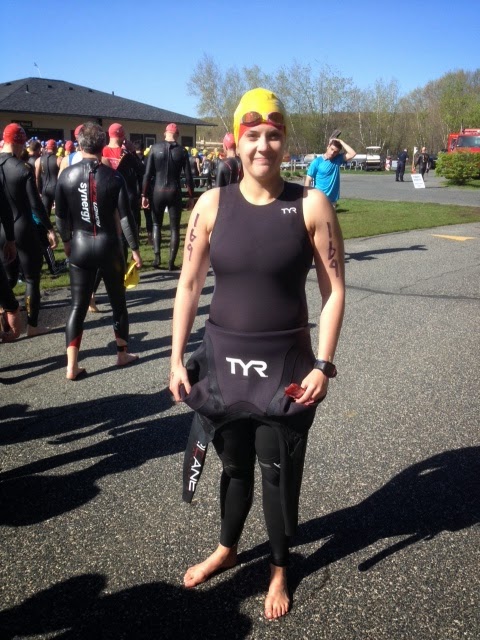 So they say this swim is 400 yds. There is NO WAY! I can never get under 8 min?! The fastest 20 year olds were in the 8 min range. NO WAY it is 400 yds. I knew the water would be cold. I wore my full sleeve wetsuit. When we got in I treaded water with my hands out. In hopes I would keep them warm to be able to have a feel for the water. I started at the front like always. I was with the YOUNG women! This is what happens when you race age group not athena. The gun went off and I went. I think I literally swam over someone- sorry! I felt a little bad about it- but when you have 20 somethings in your wave and you don't plan to be out front don't put yourself in the front of the swim wave. I knew the 20 somethings would be gone and I wasn't going to be able to hang with them. So I settled in and just focused on my swim. Crap the young ones are gone and there was NO one close to draft. Well solo swim it was. I was pretty happy with the time- my watch read 8:07. I don't tknow where the mat was on the beach. That was my fastest swim at season opener.

T1- 2:05
Its a pretty long run from the water to the bike. Got my wetsuit off pretty uneventfully. Got onto my road bike and headed off. 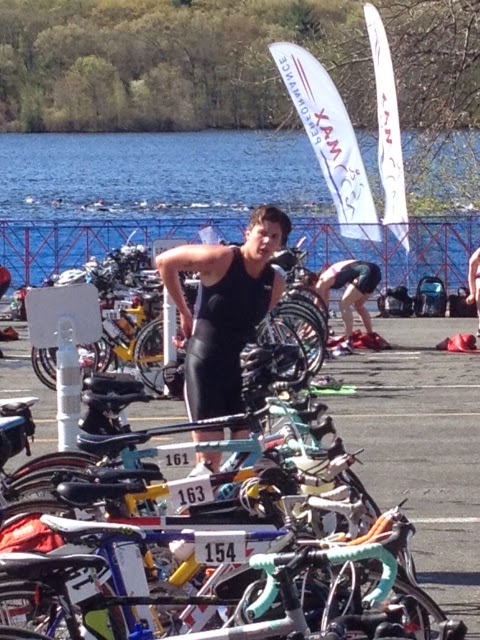 Not knowing exactly where I was headed I just focused on getting 100 cals or so in my mouth before we left the state park. I figured that would be most of what I ate on the day and I would sip on my water as I rode. I tried to focus on passing people. A lot of folks were not keeping right! And not obeying the rules. I really hate that USAT never sends an offical to this race. I came down one hill and I started to know where I was- and a mole went running across the road. I screamed run buddy run! The volunteer on the corner was laughing! I hit the bad climb of the course and passed quite a few. Then we had a GREAT downhill. I ride it on training. I bombed down it. Hit 40-45mph- on my road bike! As I came into the park again I kept trying to pass a boy who wouldn't drop back! Again I'd love an official on that one. As I came into transition I was happy with the sub 30 ride. It wasn't as fast as I think I can go but given the changes in the course and not really knowing what to expect it was pretty good. Fastest pace on the bike on this course- though course was different just focusing on MPH- was 16 last year this year 17.

Run- 25:25 8:12/mi
Coming out of transition is a hill. I thought just keep turning over keep chugging and you can catch your breath on the way down. My legs were moving! I had speed! So I dug in. I chased people down. I passed a woman in my age group. Now look for other 30s! I just kept the gas pedal pushed to the floor. I could feel it when I hit a 8:30 ish pace I could catch my breath. When I was in the 7:30-8 min pace I could barely take a breath. Okay come on push- dig- its only 3.1! I just kept running. Before I knew it I was taking the run across the damn. And this woman came by with a 31 on her calf. Okay Jul stick with her. But she had another gear I didn't have at that point. I was like maybe she thinks its closer than it is and I'll catch her before the finish! I didn't. I passed another with a 30 on her leg. Crap was she a duathlon or a tri?! As I hit the beach D was screaming. I really had no clue what my pace was at this point. I was just focusing on keeping my foot on the gas. I hit the chute with the last burst of speed I had. I felt that oh god I might puke but kept going! I was shocked to see the run time! Previoius PR on this course for the run 27:10
Finish time: 1:05:45 last year (with the 10mi run) 1:15

D and my parents came up when I came out of the finish. D was like WHAT?! Holy speed! He was telling me how he always told me I could run faster. Then I realized this beat my 5k PR a couple weeks ago- 25:27?! Crap did I just PR a 5k at the end of a sprint?! My brain couldn't process. D was like you need to be excited. I just couldn't even wrap my brain around it. It didn't seem like it was right- it didn't seem like it was me. I still really can't get my brain to process this new found run speed. The final time was enough to get me 7th in the 30-34 age group! 172 overall. 33/166 women. The change is paying off! I am excited to see what else will come!

Posted by DoubleDathlete at 8:59 AM