Just as I was finishing my taper for Patriot Half I found a race the Friday night after. Yes I know- Saturday 70.3 then the following Friday do a sprint?! But the race looked like fun. How often do you get to do a tri on a Friday night? I mean Saturday tris are rare here never mind a week night. I figure whatever lets do it for fun and my coach gave me the green light on a fun race. It was so strange to get ready for work pack my tri bag and my bike for after work. But that was the point of this- do something different and fun. 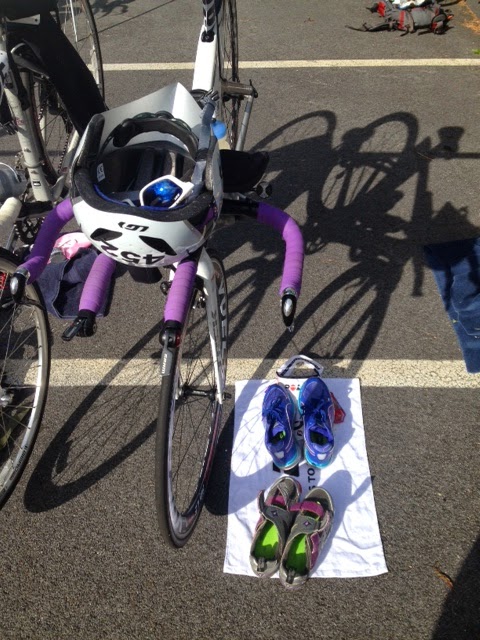 Parking was a bit of a distance from the race site- luckily I had a bike to ride. Poor D was on race support and hoofed it down to the race site. Check in process was really smooth. Lots of volunteers around to answer questions. I racked up and did a little recon. The T1 was going to be long run from the bottom of the hill where the lake was up to the transition area. I started to do the its just for fun no I want to race this... D and I chatted and he was like have fun but GO FOR IT! I knew my body was going to be tired from racing 70.3 miles but why not see what can happen?!

Swim- 1/4mi- 6:45 I decided to go wetsuit less- I figured it was another thing to deal with in transition  and I don't really need the wetsuit. Another race with the strange wave start. This time they went with 3 seconds. I guess it works- but as soon as I hit the water I was running into the men who put themselves toward the back of the male wave. Usually I can get some clean water. It was really choppy with the amount of people. But I just decided block it out and swim HARD its a sprint SWIM SWIM SWIM! 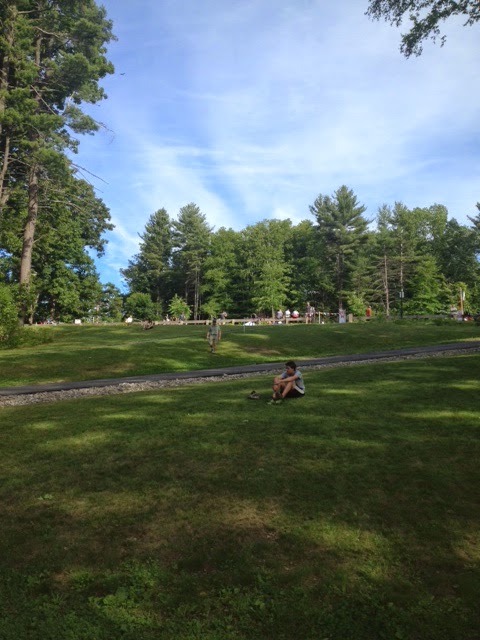 T1- 1:41 long up hill run! I knew I was out in front when I came up the hill. There was one woman right with me but I passed her up the hill. As I went out of transition I thought I was either 1 or 2 woman. Nice DON'T LET THEM PASS!

Bike- 10mi- 31:14 Just went with pedal to the medal. I would say it was a flat course. I think I got out of my saddle once to climb. I pushed as hard as I could. I figured if I stuck close to 20mph I would fend off most women. Just as I came to the final turn. I heard a car come up next to the riders behind me. Tell her her pace. Tell her how she was doing. I was like really- motor pacing?! What?! So just as I turned 2 women got by me. Okay still in top group. Let's see how I can run.

T2- 0:56 Shoes off, shoes on, grab and go. As I came out of transition I tripped on a cone and took a good fall. Even got some road rash on an elbow and hand- luckily I rolled onto my side.

Run- 5k- 26:59 Just tired to get my legs to go as hard as I could. The 70.3 started to catch up with me.  It was a little rolling but not too tough. I think without the 70.3 the weekend before I would have had no problem with the run course. I tried to focus on cheering for folks as they went by and I had I saw the top girl go by then the 2 women who had passed me on the bike. 2 more women got by me  and I saw one more getting close as I took the last turn but pushed it to make sure to not let her get by. 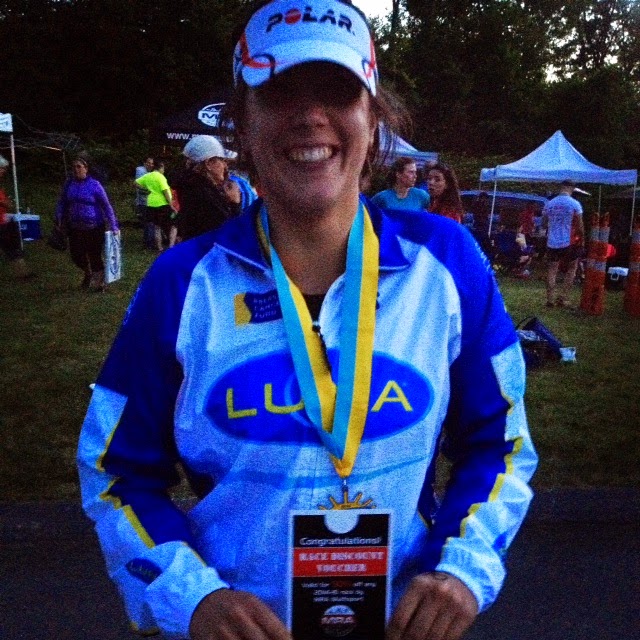 Finish 1:07:17 Good enough for 6th OA Female. Which is my highest finish yet. 1st in my Age Group! And a 8 min PR for the same distance (on a different course). Had a good day even with being tired from a 70.3!

This race director had an AWESOME BBQ at the finish. Hamburgers hot dogs cook out style. It was great. Just as they were doing the awards the sun was setting. They do a really cool award. You get 50% off another race with them. Not a bad deal! I finally looked at the race bag too- instead of the usual t-shirt there was an awesome visor that has some really nice reflective on it. I will definitely try to work this one in next season's plans! I highly recommend it!!!

*NOTE: As for the woman who had the car pacing her- I told the USAT official on site. She said she can't penalize for what she doesn't see but- that it was a first for someone reporting that! haha

Posted by DoubleDathlete at 7:13 AM