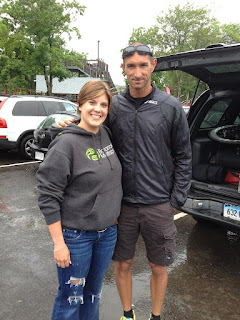 I am struggling with how to write this- my brain is still a bit frazzled from the race. I call it 70.3 swiss cheese brain- you have 1/2 a brain and 1/2 a body when you finish. I decided since there was nothing I could do to check in on Friday we would drive the 2 hours on Saturday morning. After a couple gear checks we were off. It was POURING rain Saturday- so glad that wasn't my race day. When we arrived I saw Matty Reed- we stopped to chat with him and D snapped a quick picture. The check in process was a bit off from the typical one stop shop at a larger event. Ran into some friends at check in and once I was all set I headed off for a practice swim. It was nice to get in the water and calm my nerves and get in a little ride with a friend of mine Eric who was racing. We checked in to the hotel after the mandatory meeting and racking the bike. Got some decent food in me and it was early to bed with a 4am wake up call for race morning. 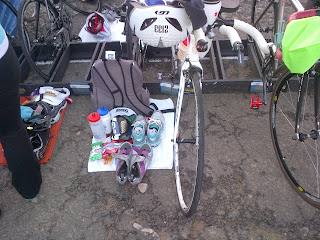 Race Morning- Got up at 4- eh who am I kidding I beat my alarm up I was up at 330. Had oatmeal with nuts and dried berries and went down to the breakfast area to toast my bagel. I actually had this creepy calm. Stuff was packed up and we were in the parking lot before 5am. I set my transition and headed to the truck to get off my feet. I put on the wet suit and got ready to head to the water. Before heading to the water I stopped to be sure transition was all good. Did a little hop in the water to get the wet suit wet and ate my gel. Quickly the pros were headed out and I was in the first wave.

Swim- 36:25- I have never been in a wave with men! WOAH! Watch out ladies they throw elbows. Luckily I got out to the front and only got in the bunches at the turn bouys. It was a bit choppy in the middle of the pond/lake whatever we were in. I am pretty happy with my time- it is about my usual. I quickly realized I was one of the first women out of the water.

T2- 2:47- Even without wet suit strippers I was faster than Timberman. I grabbed some water on the way out of the water. That was nice to grab on the fly. It was nice to see D and Jules when I was coming thru transition. I grabbed the extra fuel I wanted for my back pocket and everything else was on the bike. 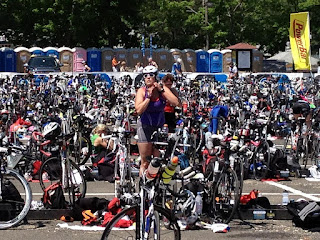 Bike- 3:58:24- The cheers were really loud coming out of transition. I guess that's b/c I was the second non pro woman thru. I was hungry like the MINUTE I sat down on the bike. I don't know if I didn't eat enough before hand or the day before... I'm kinda leaning toward the day before. I knew the bike was challenging. Hilly and technical! It was great to see Joe and Eric out on the bike. Joe passed me in the middle of the super insane hills 24-31ish. The fist bump was much appreciated and what girl doesn't like to be called sexy in the middle of a horrible climb?! I tried my best to take on my liquid calories but it felt like I was always either climbing or decending. When we were flat was when there was aid stations and I focused on refilling my aero bottle. I was disappointed with the aid stations on the bike- I would have liked to have a few more and have them where they said they would be- one was on the wrong side of the road on a loop. Tho the volunteers were great. I got what I needed when I called for water. I went thru a million emotions on the bike. It was really hard to start so early and it felt like the WHOLE race went by me and I was the last cyclist! I knew going into this race I would cross the finish line even if I had to crawl and that was always in my mind but man it is a bummer to watch everyone blow by. On a bike it seems like NO one else is suffering- or at least I haven't been able to figure out how to tell! This was a lot slower than I had hoped my bike would be- I was shooting for like 3- 3:15- the course got the best of me. Consumed: aero bottle of water (topped off 3 times), 2 bottles of heed, 2 sleeves of clif shot blocks, 2 hammer gels. (approx. 600cals). I was so hungry the whole ride- I tried to stick to the plan but I needed more fuel. Salt- I think I had 5 maybe 6.

T2- 2:34- Faster than Timberman by about a minute. I came into transition completely deflated and angry. Realized that bike was all as hard as people had said and if the run was going to be too I was in for a long run. D tried to keep my spirits up but I was pretty deflated. 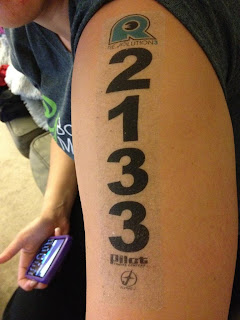 Run- 2:46:16- Slightly faster than Timberman and if you have seen the Quassy course profile I am elated! I ducked into one of the first porta potties I saw on the run to finally pee. After a mile or 2 into the run I started to realize maybe I was okay. Everyone around me was walking within the first tiny bump they called a hill. I was like wow okay just stick to an easy pace and keep chuggin. O and I had come up with a nice easy pace that we thought I could maintain for the run 11:30-12. In all honesty some miles were 10s some were 13s it all evened out to a 12:20 pace so not bad on the plan there. I had a really hard time with consuming fuel on the run. My stomach didn't want to work while I was running. If I wanted to eat or drink or take salt- I had to walk. It was like my stomach went we can't do two things at once right now.  Me the girl with the iron stomach! Luckily I thought there wasn't going to be coke and there was on the course. I LOVE COKE when I do half irons! The little shot of sugar and caffeine is heaven! The bagged water they had on the course had a really funky taste- luckily I had my hand held and I could mix it with the little heed flavor that was left in the hand held. I had to make myself eat and made sure to take on salt. The aid stations were supposed to be every mile they just weren't always at the same point in the mile so I don't think it really worked out to one every mile. I was glad I had planned to have my hand held to carry water. The course was well shaded in spots and blaring sun in others. It was really hard mentally to keep myself chugging up the hills with just about every person in front of me walking. I just kept doing my form checks and just kept thinkin Keep Going! The hills were tough. I had no idea the course went on unpaved roads for a while. But I knew I was going to chug my way thru. It was kinda nice around mile 10 when I realized I am going to be able to finish this at my pace- not with someone chasing me off the course to finish (see my Timberman report)! Consumed: who knows how much water, handheld had some heed in it to start, one package of chomps a few sips of coke (approx 200 cals) epic fail for the amount of time but I just wasn't able to eat. 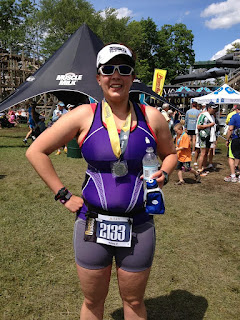 I came into the finish and my friend Jordan was pointing the way. He gave me an awesome high five and I could hear the LOUD BOOMING screams of D! It was so amazing to hear them announce my name as I crossed. I collected my medal and finisher shirt and headed over to give a HUGE hug to D. I cried again!" I DID IT AGAIN I DID IT AGAIN!" That was all I could say. I was so emotional again. D told me "I am SOOOO proud of you!" That doesn't get old. The emotion and the high at the end, it is probably one of the best feelings in the world. I set out on a day where just about anything can go wrong and to actually finish what you set out to do. I crossed the line at 7:26:26- 16min slower than Timberman. And on that course- I am happy with the result! 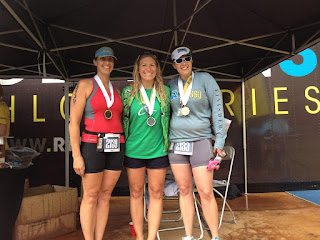 Slowly the high ended and I realized how badly I had chafed my arms- I hit medical for a little TLC for my skin. O had been watching the results live on Quassy's site and told D I came in 3rd. I didn't believe it- so much so that I wouldn't go over to the tent to check my results. A storm rolled in as they started the awards presentation and part of me just wanted to leave because I didn't believe I could have come in 3rd with the day I had. They went thru the awards and called my name- I got up and accepted my award. Took a great pic with my fellow Athena ladies. 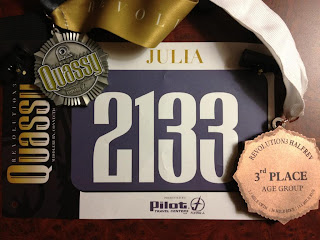 Honestly I am still in shock that not only did I finish my second half iron but I placed in my division. I never in a MILLION years would have thought I would place at a half iron distance race! As always D was the most phenomenal support and those hugs at the end of my half iron races go down in history as best EVER!


Posted by DoubleDathlete at 11:52 AM