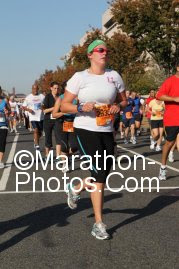 After my much needed break in London I was home for a mere 3 days before heading to Washington, D.C. Now anyone who knows me knows I am in DC enough to potentially call it home if not my second home so flying there was no sweat. The plan was to fly down Friday afternoon get to the expo spend a bit of Saturday sight seeing then run Sunday. Well the best laid plans don't always work out. I have seen all the sights of DC MANY times but D in all his travels to DC hasn't seen any so I was planning on playing tour guide.

When we arrived Friday afternoon we were still fighting jet lag a bit from London. We decided not to rush to the expo and be rushed looking through it and just take the night easy. We went to what is quite possibly D's fav restaurant for dinner Chic-fil-a. It was nice to have a very low key night. We decided to get to the expo in the morning.

It was CRAZY packed. The line to get in almost reached the street. But like any good military operation things moved quickly and we had our numbers quicker than expected. While walking around and spending WAY too much money- like I always do at an expo we ran into a couple co-workers who were running. Always nice to see friendly faces.

We headed back to the hotel to relax and get off our feet. Now to be 100% honest- I didn't have much expectation for this race. I had heard it is very crowded and I honestly just wanted to take it all in- running around the mall and just being in the environment. Somewhere in my brain I came up with the idea of wanting to finish in about 2 hours seemed to make sense with my half marathon times. After a great dinner of risotto (a gluten free GEM pre race!) we picked up some breakfast options that we could do in a hotel room with no fridge and no microwave- cereal soy milk and some bars.

I laid out my race clothes after laboring over the capri, short, skirt decision- I went with capris and my new headband- "this is my race pace" and my new arm sleeves "if it wasn't for me you'd have no body to pass". The plan was to walk from the hotel to the Pentagon- I went with the follow the crowd method. It paid off and we got to the gates just as they were opening the start area. D was in wave one and I was in wave 3- slightly different paced runners huh?! D hung with me for a bit back with the slow folk and then headed up toward the start a little before 8.

As I was standing by myself waiting on my start time of 8:15 I made friends with the girl standing next to me. I know shocking huh?! We got to chatting and realized we both wanted to run about the same pace- hopes of a 1:45 with actual thoughts of being around 2 hours. She had never run a 10 mile distance before and honestly it was my first 10 miler but not my longest run so I figured this could be fun. We decided to stick together. To be honest it was great. Sometimes you worry about wanting to run a race with someone you don't really know (at all) but pacing was good a little bit but not too much conversation. We hit the 10k timing chip and I am fairly certain it was a 10k PR at 1:03- though the silly timing pad company had a different time.

On the loop back around the Air and Space museum I slapped hands and saw a co-worker. Let me just say that city isn't as flat as it looks. The long slow down hills killed my quads and the long slow up hills were crushing my calves. The 14th street bridge was a smasher! The sun was coming up and it was starting to get hot and that up hill climb was tough. Just as we hit the mi 9 marker we went by 2 Wounded Warriors both single leg amputee's. I turned to my new running buddy and said "okay that's all I needed to make it to the finish- I think this is tough on 2 legs I can't imagine how hard that is!"

With that we finished out the last mile- I was trying so hard not to puke before I crossed the finish. I crossed the finish at 1:44:50 by my watch- 1:45:50 officially. I can't believe I not only killed my thoughts of 2 hours but made it in the lower end of the time I thought. My new running buddy crossed a bit before me and was so excited to have finished her longest race. The finish line was congested and I quickly started to seize up and was desperate for water. When I could finally get some moving room and some air and water I felt like a million bucks. I had a good race.

D had a great race too when I found him around the Finisher Coins. He had a 10 miler PR by 3 min! I was happy to have a new found running buddy and to have finished in well under the time I expected. I will definitely do the Army 10 Miler again- hopefully next year. Next time I will write down a faster race time so I don't have to do so much weaving around people walking before we even hit mile marker 1. But great race awesome environment and if you want a race filled with motivators what is better than running by a ton of Wounded Warriors?

Posted by DoubleDathlete at 7:10 AM