London- A much needed break! 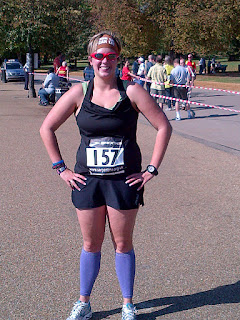 About 2 weeks ago while driving to a meeting on travel I called my coach. I had a horrible feeling- did my half ironman steal my mojo? We had a great talk. I told her I had a AWFUL break down on reach the beach the weekend before. I was running my second leg at about 1 am it was a VERY hilly 9 miler. I was so mad about people passing me and how slow I felt. During my run in my head I composed the email to my coach saying I was quitting. No more swimming, no more biking, and definitely NO MORE RUNNING! Obviously after I finished I realized it was just the run talking. But given that I had just done my half ironman then a sprint triathlon then reach the beach I had reached my physical and mental breaking point. Coach told me that was completely normal experience for reach the beach, and after doing an half iron and my mojo would come back.

On Monday I left for a much needed vacation to London for 7 glorious days. A few months ago D and I found a great deal on tickets and our friends offered to host us at their lovely home. We got on the plane with little plans for what to do when we landed- other than the booked tickets to Buckingham palace and a 5k the other 5 days were whatever we felt like.

Both of us quickly realized when there isn't anything else to stress you out sleep is so grand! We both slept like rocks. It also helps that the guest bed was SOOOOOOO comfy! We did go see everything we planned to see: Tower of London, Tower Bridge, Buckingham Palace, Westminster Abbey, Parliament, Big Ben, Eye, saw a show- War Horse, Piccadilly Circus, shopped on Carnaby St., and went to the British Museum. In between all the walking all over London was the 5k.

London was in the middle of a week of indian summer- temps 80-85 everyday. The race was a lunchtime 5k. It was hot and my legs were dead from all the walking. My time was slow- but I ran a race in London.

Other than the walking around everyday and the 5k all the workout clothes I packed didn't get used. I actually took a break. Mostly because by the time I got out of bed each day it was so hot and humid. I had no bike to ride for my planned training and the one day we were going to swim we slept through the alarm. I have to say normally I would feel horrible about this but right now I am starting to think it was the much needed break I was looking for.

Work had me stressed to my max. I was physically and mentally done with training and now I can honestly say I am looking forward to my next workout. I think London was just the break I needed. Hopefully I will feel the same way when I am slugging through the Army Ten Miler on Sunday. EEEK! I think I will just go out to enjoy it!

Posted by DoubleDathlete at 1:07 PM